While I was working on Locoroco my last task was to create the Loco House and Loco Editor mini−games. They are basically mini level editors.

Locoroco the game uses a signal system based system for the majority of its setups. What that means is using very simple objects that send and or receive signals the designers then connect them in creative ways to make the game. A simple example is you might have a switch that has two output signals "out_pressed" and "out_released". You might also have a door that has two input signals "in_open" in "in_close". If you connect switch.out_pressed to door.in_open then pressing the switch will open the door.

Let's say the designers ask for a new type of door that after it has been opened, closes after 5 seconds. Instead of actually making a new kind of door or adding options to the existing door we just given them a timer object that when it receives a signal sends another signal a settable amount of time later.

Using small objects like this most setups in the game were created. For each feature a designer wants we figure out what kind of simple objects we could give them to make that possible. In this way we get lots of flexibility. In the original Tokyo Game Show version from September 2005 even the scales that tell you "15 LocoRoco Required" were made this way. Using 5 objects of only 3 types

Can you figure out how to connect them to get it work?

Anyway, originally I wanted to put the ability to use some of those features into the Loco Editor for players to use. I actually put that feature into the Loco Editor but I could tell the director had kind of forgotten about it. Even though I had showed it to him working he was way too busy to give it any time to fully plan out and after a couple of months of him never mentioning it again I could tell he had forgotten about it.

Since I knew we were short on time I figured if I brought it up he'd tell me flat out "there's no time so let's cut it". So, instead I decided just not to ask. I also felt if I left it in as is the testers would find it and again I'd be told "take it out" so I decided "You know what? I'm going to hide it behind a code and just not say anything".

So, in the shipping LocoRoco there is the ability to edit signals in your own levels. Here's how you do it.

First, get yourself to the Loco Editor. From the Menu screen pick Mini Games and then pick the last game 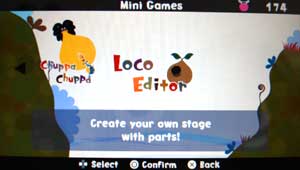 Once in go to the System Menu by pressing Square 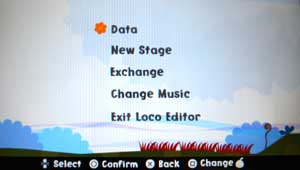 To enter a code you have to hold L+R (the top buttons). The codes work like this

While holding L+R enter the code RADCATLOCOROCO. If you enter it correctly you should here a small sound. Exit the System Menu and go into the Parts Menu. Scroll to the end and you should see these parts 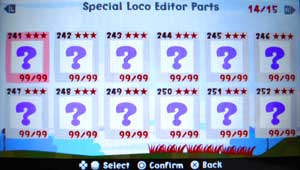 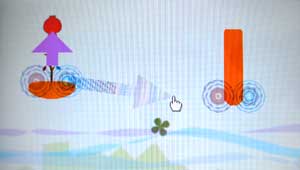 The parts are as follows:

That's the good news now for some of the not so good news.

One problem was that because this was secret I couldn't get input from the entire team about what kinds of objects we should put into to it. What I had suggested originally when I told them how the signal editing worked was that they should make almost ALL the parts work with signals. Parts like the letters A-Z could send a signal when they are touched, parts like the wind could take a signal to turn them on or off, etc... Unfortunately they didn't do that so none of the 156 original parts have been connected to signals.

Another was that we were out of memory in the level editor. 156 parts available take a lot of memory. That meant there wasn't a lot of room for fancy parts nor was there room for icons. That's why there are only 14 parts I was able to add.

Yet another issue was trying not to get caught. The tools that build the data would print status messages about what they built so I had to fix them so they wouldn't print those messages for my secret parts lest someone see them and start asking questions.

And, finally I had to find a way to hide the codes so the testers wouldn't find them. They actually found a clue once. The code used to be entered on the Parts Screen if you held L+R. While the code was being entered the other buttons didn't work. They flagged that as a bug "buttons must work even with L+R pressed". For a moment I thought maybe I could just say "by design" but then I thought if I didn't fix that the lead programmer would fix it and in doing so he'd see the secret code part of the program. So, I moved the place you enter the codes somewhere else and hoped they wouldn't notice.

The biggest issue though is that none of it was ever tested and so there are bugs.

You can get an arrow from any part and connect a signal to any part even of that part is not suppose to support signals. (e.g., part #001) They won't actually do anything.

You can only connect 20 signals total. I suppose that wouldn't be a bug if I didn't tell you about it but you should have been able to connect 500 like the USA version

unzip them and copy them to the correct place on your PSP memory stick. These levels have a bunch of parts 241 and 247 already in them. Here's the deal. You cannot NOT pull out new signals from those parts. What you can do is select the signals already coming out of them and connect them to other parts.

So, here you have it.

While I'm at it here are a few more codes you can enter in the same way.

Adds 5 locorocos of each color to your Loco House.

gives you all the parts

While placing objects, HOLD Select and use up / down on DPAD to scale objects. Not all objects scale and a few do visually but don't work (e.g. toge) 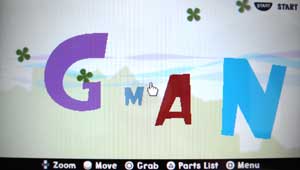 Note: this is one place were I probably disagreed with the director. The director pulled that feature because he didn't feel like explaining it to the user. He thought it would make the editor more confusing. Maybe he was right.

The next set of codes let you *cheat*. I guess technically so do some of the ones above but I'd argue those ones let you have fun, the following ones though, well, it's up to you if you want to use them. These ones are entered from the World Map. You MUST select a level so you are on the "Start? Yes / No" message. 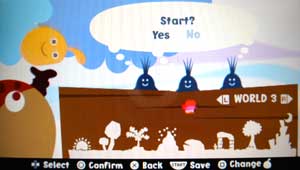 Again, while HOLDING L+R the codes are

gives you all the muimui

This will remove all muimui from all levels, since they will have all already been collected, but it will also open all the mini games, let you select all 6 colors of locoroco, and let you select all music in the Loco House and Loco Editor.

I suggest you use a different game save if you enter these codes.

Disclaimer: This page as absolutely NOTHING to do with Sony. I do NOT speak for them or represent them in any way.