I'm using meteor to get something done and I needed to implement "likes" as in something you can click to "like" something and then that thing can display a number of likes.

There's a package that helps with this in meteor. It's called "socialize likeable" and it seems fine. The code is not too big. I skimmed the code to see what it was doing. Before that I had thought about different ways to implement such a feature and from reading that code helped inform my own ideas about the what was probably the right way to do things. It was doing it that way so I go to install it

I saw this talk recently

which if I understand correctly and a very interesting point of view which in one way could be summed up as "write more code and less libraries". Yea I know that sounds controversial. Watch the video and see what you think.

If I tried to summarize here's what I took away:

It seems like writing libraries is a good thing. It makes your code smaller. It makes it easier to read. It makes it possible edit the library and affect lots stuff. The problem is, especially if you're a company like Facebook with thousands of programmers working on the same code base is that there's no way to organize all the libraries. Everyone is going to write their own libraries. That means someone using their code has to first go learn their libraries. Whereas, if you had just written the code instead of using a library and you had use common patterns to write your code then the code would be understandable by others quicker.

Now, he wasn't saying write zero libraries. What he was saying though is make sure your library is solving a problem and not adding more problems. He gave some examples, one being AngluarJS which I haven't used but it is/was all the rage for web dev for the last 2−3 years. He claims that while it solves some big issues and therefore solves lots of bugs it also is a very complex api with a very large number of functions and that complexity in his opinion outweighs the benefits. In other words it's a net negative.

I have a feeling I'm not going a good job of summarizing his POV.

He is specifically talking about JavaScript so for example one idea/opinion he had is don't make custom libraries when there is a standard that would solve it. Write a polyfill (in other words write a library that implements the standard for browsers that don't yet support it). That way your code will follow the standard which eventually everyone will know vs custom library #749 that only you know.

Anyway I'm not sure how much I agree with this idea. I think it totally makes sense for Facebook and possibly for Google and other giant teams. But, I wonder if the same is true of a small team or a team of 1. Maybe it does. Or maybe at least thinking about "is this library going to add more problems than it solves in the long run" before writing one.

Well, something to consider at least.

Thoughts of a C/C++ programmer after years in JavaScript

If you haven't read the 4 stages of a C/C++ programmer using JavaScript this is a follow up on that so you might want to read that first.

Not that anyone reads this website I only update 3 times a year now but before you get your stockings in a bunch I'm not saying JavaScript rocks. I'm only saying that after using it for many years there's things I've come to love that I now can't stand when I'm not in it. Example include

Every device has a browser.

Think about what I've have to do in C++ to get a cross platform canvas2d like API. I'd probably have to build Skia which is like a gazillion lines of code. I'd have to figure out what bazillion options to pass it etc, watch it compile for 10−15−20 mins and hope no obscure errors pop out.

The 4 stages of a C/C++ Programmer using JavaScript

Ugh, I've got to do some stuff in JavaScript for this project. Fuck this language sucks. What the fuck is up with those global variables. What do you mean braces don't define scope. Well at least I found some stupid way to make classes and inheritance work.

Wow, if I use closures creatively and everywhere JavaScript is pretty interesting. All this async stuff happening for free. And all these APIs that just work. I can put something on the screen without needing 14 libraries and spending a week trying to figure out how to get a window to appear. I don't have to figure out how to render fonts on 7 different platforms in 17 languages. I can download images, draw stuff in canvas and WebGL, play audio, access the camera and mic and with very minor hiccups it just works. I get immediate feedback, just refresh. Stuff can be styled by my designers without my having to write tons of code and when I want to show someone I just send them a link. This is pretty awesome.

I'm going to do some C/C++ programming again. Ugh! WFT this stuff no longer compiles! Why doesn't this project load in my IDE anymore. They must have changed the format. DAMMIT why doesn't libglfobar link? Ugh! What? I've got to write 200 lines of meta−templating code just to make generic callbacks? Fuck! Why is this so tedious! Oh you want to check it out? Sorry I don't have access to a Mac to compile it for you. Sorry. Fuck I hate C/C++!

Tweening probably has many definitions. I heard one guy call it mapping as in mapping one range to another range. I've always called that lerping. The simplest lerp is something like

Then given lerp goes from 0 to 1 value will go from start to end.

I moved all my webgl articles to their own website. Putting them here on my blog was a pain in the ass as they weren't a good match for wordpress. On top of that I think putting them on their own domain will hopefully encourage contributions?

I wrote an article for webglfundamentals.org called less code more fun. WebGL is a verbose language and I wanted to explain at least one way write some functions to make it less verbose. After that I wrote an article about drawing multiple things. The combination of those 2 lead me to think I really should turn those concepts into their own library. The result is TWGL.js. 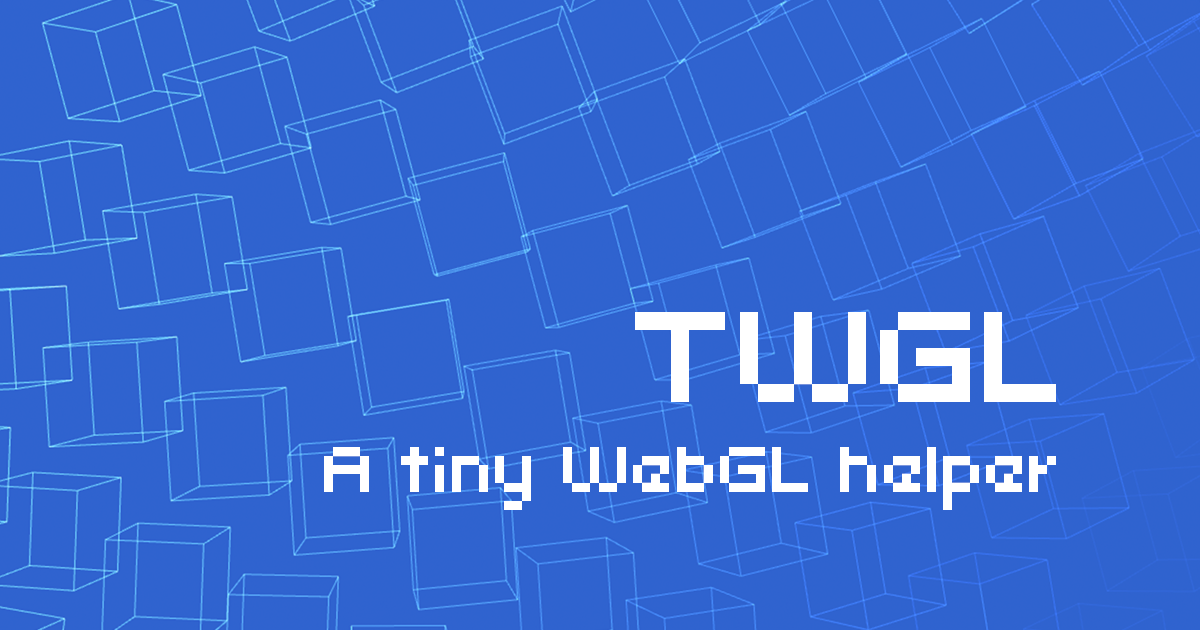 When to find a library vs when to write code.

As a C/C++ programmer I rarely looked for libraries unless it was larger project. For example, I needed to read a BMP file or a TGA file it's like literally less than 100 lines of code. Look up the format, write a little code, done. On the other hand if I needed to load a JPG file or PNG file those formats are far more complicated and so I'd end up finding a library.

But, now that I'm in JavaScript land there's a bajillion tiny library for all kinds of things and it ends up making me always wonder if I should write some code myself or check for a library. This ends up often feeling like a waste of time.

I have a feeling this idea is a lot like documentation. Everyone wants it but no one wants to do it.